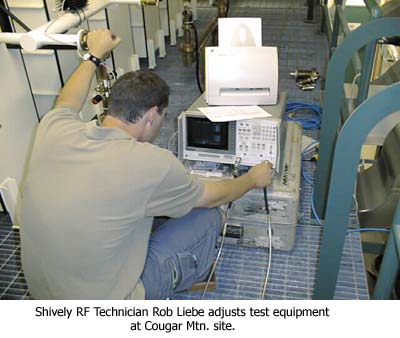 When Bob Surette, RF Manager of Shively Labs and Clay Freinwald, Entercom Seattle’s Senior Facilities Engineer got together at NAB 2002, they had a lot to talk about. Freinwald proposed a breakthrough approach for combining digital and analog FM signals using existing combiner systems. Surette applied his expertise with IBOC and analog combining systems and yet another technique was developed that has the potential for making IBOC much easier to implement. The only thing left was to do the real world testing. It was only natural that Entercom’s Cougar Mountain auxiliary transmission facility in Seattle be the site for these tests as it combines state of the art, highly versatile combiner and antenna systems with a challenging broadcast environment.

Early in August, a team of broadcast engineers from Entercom, Shively Labs, Broadcast Electronics, and iBiquity assembled at Cougar Mountain to test the feasibility of this new technique for feeding digital IBOC signals through existing balanced combiner systems. Freinwald’s approach involves feeding the digital signals through an isolator into the combiner in the same manner as the analog signals, but through the opposite or normally terminated leg of the input hybrid. The digital signals are then combined and travel down the broadband line in opposite directions. The digital signals exit the combiner through the analog wideband input where a transmission line feeding a separate “digital” antenna replaced the standard wideband dummy load.

In the case of the Cougar Mountain site, the Shively 6014 six bay broadband panel antenna is configured with dual inputs, making it possible to simultaneously feed analog to the top half of the antenna and digital to the bottom half, while maintaining full analog transmitter power. This not only enabled the digital signal to be tested in the presence of multiple high power analog signals, but also meant a minimum of downtime while the system was reconfigured for each night’s testing. This was a fundamental requirement for Entercom since the 8 stations on the system needed to maintain operational readiness while routine maintenance is being performed at the main broadcast site on West Tiger Mountain.

“The tests prove that it is feasible to broadcast analog and IBOC digital signals over the same equipment without combining them in a high level injector type system and without causing interference,” according to Bob Surette, Shively’s Manager of RF Engineering. “In practical terms, this process allows stations operating on combiners to forego many of the start-up and operating costs of IBOC implementation. Since the digital and analog signals are never combined, the losses associated with injecting the digital onto the analog carrier are eliminated. The 90% digital and 10% analog signal losses associated with normal high level IBOC combining are eliminated. For multi-station sites where AC power, air conditioning and space increases make standard high level combining especially expensive, this technique provides a real alternative.”

The Cougar Mountain test is being conducted on Entercom’s Shively Labs Model 2540 combiner using a Broadcast Electronics Fsi-10 IBOC signal generator, BE-Fxi-60 digital FM exciter coupled into a broadband FM-1C1 transmitter and the latest version of the iBiquity DAB encoder and processing equipment. To keep the DAB signals within the iBiquity spectral mask, the RF output of the DAB package was fed into a small Shively IBOC filter before coupling into the existing combiner module.

“I am very pleased with the results of this “proof of concept” test and I want to thank all the participants. Stations implementing this novel use of existing multi-station balanced FM combining equipment will realize significant cost savings over the options if installing a separate multi-station IBOC combiner at their site or the alternatives of expensive high and low level combining techniques,” said Marty Hadfield, Entercom’s Vice President of Engineering. Hadfield went on to say, “This test was a success when the iBiquity DAB signal from the BE transmitter package connected (using a conventional low power EMR RF isolator) through the normally terminated ports of the Shively balanced combiner modules and into half of the Shively panel antenna (to a separate antenna). In this particular test configuration, the analog transmitter is a vintage Collins 831g-2 running at 10kW of transmitter output power. The DAB package is running an average transmitter power output of 100 watts. The center of radiation difference between the two halves of the split fed Shively panel antenna is just 10 meters and exhibits comparable gain factors and envelope patterns, thus providing reasonable assurances that the analog and digital signals maintain their complementary carrier levels throughout the coverage area.”