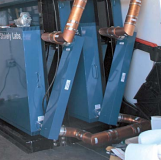 The assignment seemed simple enough, even routine. Build a multi-station transmitter site on a mountain. On the other hand, we should have known this one would be interesting from the start.

A COUPLE OF COMPLICATIONS
We were brought in by BMB Communications Management, who had taken the project over from another party. There were just a few complications. First, the final 600 feet to the site is at an incline so steep that it is almost impossible to walk up it. The only vehicles that can get up the last incline have four-wheel drives with dual wheels and tire chains. Second, the site had no telephone or power service, so we needed to get a generator and fuel tank installed. Third, we had to fit four Class C FM stations, a combiner, and all support equipment into a 10 x 12 building. Yes, you read that right, four class C FM stations in a 10 x 12 building. Finally, we had a hard deadline that was only 16 weeks away.

STEPPING UP TO THE CHALLENGE
This is our specialty: tackling difficult projects that no one else can complete – generally under extreme conditions. Needing the impossible on short notice, we called Edd Forke of Shively Labs in Bridgton, Maine. We asked him for a multi-station panel antenna with a massive amount of gain – almost 12 dB worth – because the transmitters could be no more than 10 kilowatts, due to the space limitations. The panel antenna had to be omnidirectional and fit onto a short tower with a four-foot face, while meeting RFR limitations. It had to accommodateup to eight stations with a very wide frequency swing. And it had to be affordable for the new site owner. We also needed a four-station balanced combiner that had to fit into the smallest footprint possible – and we needed it in half their quoted production time. Not surprisingly, Edd sent us right back to dial tone.

NO KIDDING!
We called back and convinced Edd that we were not kidding, had not been drinking, and that Alan Funt was not behind the window at the end of the room. After the justifiable teasing back and
forth, he set to work gathering the troops at Shively Labs for the project. Shively divided the project into two working groups – one working the antenna and one working the combiner. Both of them, we suspect, were equipped with voodoo dolls in our likenesses and proceeded to vaccinate them liberally with sharp office implements. Edd continued to take our calls for reasons that none of us can explain.

A UNIQUE COMBINER
Alan Plummer’s team set to work on a clever way to get the required combiners into only a quarter ofthe available room space. Alan created a rather unique implementationof the 2640-06 combiner. By arranging the modules in a “stairstep” vertical-diagonal configuration, he fitted the available space with only a foot to spare. The 11-foot-tall combiner mounting-frame fit perfectly into the building design, so we got the combiner into fabrication after sweet-talking the Shively production people. The building manufacturer was advised of this very tall single-story building requirement, and began production. The combiner would ship after the antenna because the production capacity had to be devoted to the antenna until it was completed.

THE ANTENNA
The 10-bay, broadband panel antenna was quickly modeled on the Shively pattern test range. The mounting and mechanical specs were then signed off on by World Tower, the tower vendor. The tower design was finalized and the steel went into production. The Shively Team started the antenna that should have taken 16 weeks to fabricate, but completed it in only eight weeks, and did so during the span of three major holidays – Thanksgiving, Christmas, and New Years. More sweet-talking was done, the magic word (“overtime”) was used, and we sweated out the next eight weeks until the delivery was finalized. The only quick way to get all this equipment to the Nevada site was to use a dedicated truck. Shively also arranged for near-real-time tracking of the shipment. The antenna arrived in a 40-foot tractor-trailer, after a straightthrough, three-day drive. We now only had ten days remaining until one of the station’s construction permit expired. Plenty of time to get it all built, right? Remember, the combiner had not shipped yet because Shively production capacity had been committed to the antenna.

JUST A LITTLE BREEZE
The tower site is several thousand feet above Mesquite, Nevada on government-owned land. As noted, access was a challenge, even in good weather. However, late January winter conditions were to make themselves known in a big way. The first custom building that had been assembled onsite (a prefab building would never have gotten up to the site) was completely destroyed in a windstorm with gusts that exceeded 75 MPH. As a temporary shelter while a replacement building was manufactured, we sourced a “Tuff Shed” lawn building (yes, the ones you can buy at Home Depot). We arrived on-site for the big push to get this all on the air. The tower crew had been on-site for weeks, building a tower in this hellish, windy environment with a picture window view. It took us two days to assemble the antenna bays, once we got them from a staging area near Mesquite, to the site. We were now fairly comfortable that we would get the first station on the air before the CP expired. However, the night after we got the last antenna panels assembled, we had another violent windstorm that prevented site access for two more days. When we got back to the site, we found that despite our having lashed the antenna panels down, two of the 30 panels broke loose, were blown off the mountaintop and completely destroyed. The on-air deadline was now only two days away and we were missing two very important assemblies that had been turned into modern art.

SHIVELY SAVES THE DAY
We immediately called Edd and Bob Surette at Shively, and explained what had happened. Although it was not possible to re-fabricate those panels and ship them three time zones away in 48 hours, we had to have this thing on at full power, or lose the CP. The FCC does not give extensions except for very specific circumstances. Shively’s antenna team, headed by Dennis Butterfield, studied the problem and found a way to leave two radiators off the panel array and still have the required gain toward the city of license. Shively overnighted highpowered dummy loads and jumper cables, to put in place of the damaged panels, until replacements could be built. The loads and jumpers arrived on site with less than 15 hours to go until the CP expired. The tower crew worked into the night wrestling the feedline into place. We had to use five-inch high-powered feedline because the Bureau of Land Management requires jacketed cable, so rigid line was not an option. Imagine the size of a cable reel that has 220 feet of five-inch line on it! Meanwhile, the combiner had arrived, even though its destination was currently a pile of rubble at the bottom of the mountain. We had to put the first station on the air solo, into an antenna completed with dummy loads and jumpers. The first station went on the air, at 3:00 AM, only two hours and five minutes before the CP expired!

NO TIME TO RELAX
Once we satisfied the terms of the CP and the replacement building was assembled, we had yet another CP expiring in just a couple of weeks. For this station, we would need to get the combiner in place. Due to the extreme complexity of the system and the tight deadline looming, Shively sent out two factory technicians to help assemble the cool ’57 Chevy Blue combiner and sweep it to make sure that we did not burn everything up under full power. A dozen boxes of parts were hauled up to the site and assembly started, but was almost immediately halted. Two of the structural rails that comprise the combiner’s mounting frame were missing – they were received into the local warehouse but somehow never made it up to the mountain.
The antenna and combiner were swept by the Shively technicians and found to be right on the specifications obtained during factory testing. This is in itself speaks highly of the Shively construction methods, since the road up the mountain is rough enough to jar your fillings loose. The second station got on the air. Once the replacement frame rails were fabricated and shipped, Shively sent technicians to help finish the installation and check operating specifications. The system now stands ready for the last two stations to be installed, once their respective CPs are issued.

NOW IT’S MILLER TIME
One thing that we keep telling clients is “If this were easy, everyone would be doing it.” Taking these messedup projects and making them come to life is actually a lot of fun, despite its Maalox moments. The gang at Shively took ownership of the problems that cropped up and never once said “it can’t be done,” even though other people involved had serious doubts. The project was a success, as measured by the stations meeting their deadlines and their licensees being happy – or at least as happy as licensees get. We are already working with Shively on our next project, which may require site access by yak and shirpa. For some inexplicable reason, Edd still takes our calls.